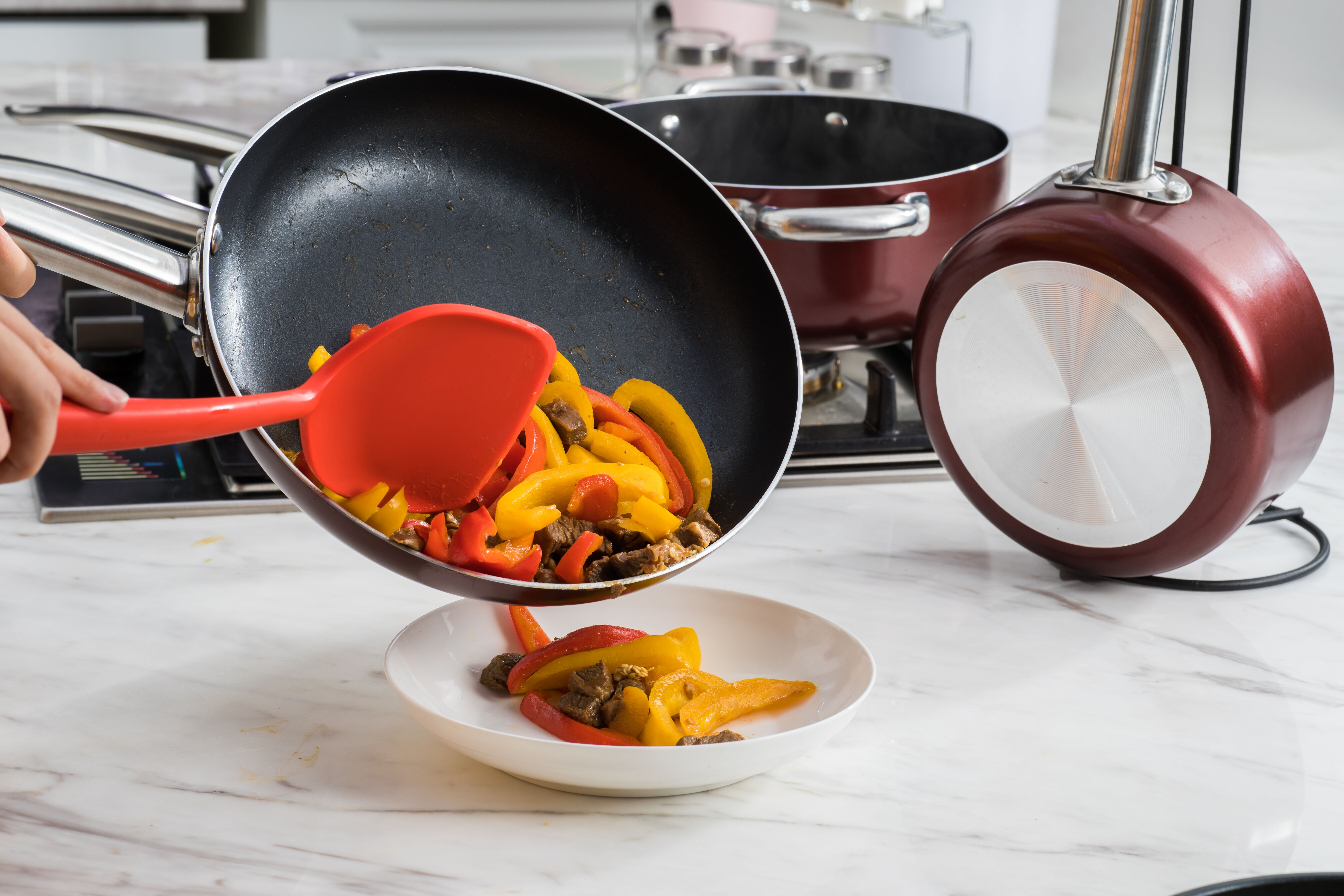 Recent studies have found that per- and polyflouroalkyl substances (PFAS) are more dangerous than we had initially thought. On June 15, 2022, the Environmental Protection Agency (EPA) has issued unprecedented health advisories for two additional PFAS: hexafluoropropylene oxide (HFPO) dimer acid and its ammonium salt, commonly known as “GenX” and perfluorobutane sulfonic acid and its potassium salt (PFBS). These synthetic chemicals were considered a replacement for PFOA and PFOS, but new science discovered that they have the same or worse effect as their more common predecessors.

These new water health advisories for PFAS chemicals formed under President Biden’s plan to deliver clean water. However, clean water advocates are still waiting for mandatory limits and regulations on PFAS in drinking water, so as it stands, individuals are left to find alternative solutions to avoid PFAS in consumer goods as well as food and water, such as water filtration systems tested effective against PFAS and other forever chemicals.

These highly toxic ‘forever chemicals’ that have been linked to certain cancers are found in a staggering 99% of Americans. Here’s what else you should know about PFAS:

PFAS were introduced in 1946 by DuPont’s invention of Teflon, a then-popular non-stick coating for cookware. Later, PFAS were found in the drinking water of towns surrounding a Teflon manufacturing plant. PFOA and PFOS were phased out of U.S. manufacturing in 2002 under pressure from the EPA after discovery of their health hazards.

PFAS are a large group of manufactured chemicals that are widely used in everyday materials such as cookware, clothing, cosmetics, personal care items, water-resistant products, stain-resistant carpet, firefighting foam, and a long list of other consumer goods.

PFAS molecules are made up of a chain of linked carbon and fluorine atoms. PFAS were engineered to add stability and low surface tension to products in the manufacturing process which is the reason they are so widely used and depended upon. Because the carbon-fluorine bond is one of the strongest ever created, these chemicals do not degrade in the environment. Scientists can’t even estimate the environmental half-life of PFAS – the amount of time it takes for 50% of the chemical to disappear.

There are over 9,000 types of PFAS identified today, but the two main PFAS commonly used in manufacturing (and the most heavily researched) are Perfluorootanoic acid (PFOA) and Perfluorooctane sulfonate (PFOS). PFOA and PFOS were manufactured for the longest time and are the most widespread in the environment. They are also the PFAS chemicals we have the most knowledge of due to extensive research discovering links to cancer and other diseases over the last few decades.

The use of PFOA and PFOS in manufacturing has since been banned in the United States, but chemical manufacturers have replaced them with alternative PFAS, such as GenX and PFBS, which as it turns out, are just as bad. In recent news, the EPA issued new health advisories for GenX and PFBS based on new science that deems these two GenX PFAS chemicals more toxic than PFOA, the chemical they were developed to replace.

Why are PFAS dangerous?

Negative health effects may occur with concentrations of PFOA or PFOS even in water that are near zero and below EPA’s ability to detect at this time. Recent health studies found that lifetime exposure at staggeringly low levels of 0.004 and 0.02 parts per trillion of PFOA and PFOS respectively, have a severe impact on immune and cardiovascular systems. They have also been linked to decreased birth weights in addition to other harmful side effects. These recent findings prove to be far worse than what was previously thought in 2016—the last time health advisories were made on PFAS by the EPA.

In 2017, the International Agency for Research on Cancer (IARC) identified PFOA as a possible human carcinogen based in part on limited epidemiologic evidence of associations with cancers of the kidney and testis in heavily exposed subjects.

A study by the EPA on GenX and HFPO-DA with laboratory animals showed adverse effects in the kidney, liver, immune system, fetuses and babies.

A higher occurrence of kidney cancer and mortality were observed among people who had high PFOA exposures from employment in a PFAS manufacturing plant or through contaminated drinking water in residence in the surrounding community.

Other links to PFAS over the years:

Where are PFAS found?

How do PFAS get into tap water?

PFAS have been discovered nearly everywhere, most prevalent in communities surrounding manufacturing plants that use or have used PFAS at any capacity. However, PFAS have been found in 99% of Americans, and has been detected in tap water across the country. This could be due to the infinite amount of products that have been produced with PFAS or imported over the decades. The process or manufacturing along with the disposal of these goods in landfills could be a possible explanation for the frequency of PFAS found in our environment.The runoff from these plants contaminate the water, soil, and air, and spread out into the environment. If the sources of private wells or public water systems come from surface or groundwater that has been contaminated by PFAS, proper treatment of the water to remove them is necessary. However, that is not always the case, and the PFAS contamination will carry onto tap water. Due to their strong bond, the degradation of PFAS are unknown, which makes them persistent in our environment and in our bodies once ingested.

The EPA recommends states, Tribes, territories and drinking water utilities that detect PFOA and PFOS to take steps to reduce exposure. Although these forever chemicals are now outlawed, they remain in the environment due to their lack of degradation. The EPA advises that individuals concerned with PFAS levels in drinking water should take action to reduce exposure such as a water filtration system that has been tested for removing PFAS contaminants.

Who is affected by PFAS?

These toxic forever chemicals have been detected in 99% of Americans even since the ban of the use of PFAS. An additional study found that PFAS were even found in 100% of breast milk samples, putting the most vulnerable at risk. As of July 2019, the EWG’s tracking map shows that PFAS contaminates public drinking water systems serving 19 million people in 49 states. Unreleased federal data suggest that up to 110 million Americans could have PFAS-contaminated drinking water.

Due to the extensive manufacturing of goods using PFAS and the slow move to ban them until recent discovery, PFAS are extremely frequent in the U.S. environment. But let’s take a closer look at other regions around the world.

In the United Kingdom (which covers England and Wales), the Drinking Water Inspectorate states “drinking water must contain PFAS chemicals at no more than 100 nanograms per litre (ng/l). Above that, action must be taken to reduce levels.” As we noted previously, even at near zero levels, PFAS have proven to have adverse effects on humans. This further stresses the importance of taking PFAS filtration into your own hands.

In December 2019, the European Parliament and the Council entered an agreement to amend the Drinking Water Directive to include a limit of 0.5 µg/l for all PFAS. This follows a grouping approach for all PFAS. It wasn’t formally adopted until a year later, and member states have two years to transpose it into legislation. Despite this efficient approach to regulating certain PFAS in the EU, efforts have only been able to cover PFAS groups with highest urgency that are on the REACH Candidate list of substances of very high concern (SVHC). This is unfortunately due to the very large number of PFAS that exist.

Similarly in Canada, PFOS or PFOS-containing products have been banned from use, sale and import since 2008. However, some PFAS not manufactured in Canada may still be present from imported or finished goods. Some exceptions are made for firefighting products, and products made for military use in addition to some ink and photography media.

PFAS are prevalent on a global scale, and it can be concluded that individuals should stay diligent to avoid PFAS while shopping for goods or foods. When it comes to drinking water, certain filtration systems have been tested for effectiveness against PFAS and its associated types.

How do I know if PFAS are in my water?

Currently, the best way to find out if PFAS are in your tap water is to call the public water system your water is supplied by to see if they have tested for PFAS. If your water comes from a private well, RIDOH’s Private Well Program may be able to tell you how to test for PFAS.

How to protect yourself from PFAS & PFOS in water?

Although at this point it’s essentially impossible to avoid PFAS altogether, there are ways to prevent even more exposure, especially in children and pregnant mothers. Avoid products that may contain PFAS such as stain-resistant or water-resistant materials — you can visit the brand’s FAQ or contact their support to find out if PFAS were used. Also avoid non-stick or Teflon cookware, plastic or grease-resistant containers, and most importantly, avoid unfiltered water.

PFAS and many other harmful contaminants travel through your tap water. It’s important to always filter water prior to drinking or cooking to avoid ingesting unwanted chemicals and pollutants like PFAS, lead, mercury, heavy metals and others. The LARQ Pitcher PureVis™ has been third-party tested and approved for the removal of over 100+ contaminants including PFAS and PFOS with the Advanced Filter. Plus, you can use it to track your household water consumption and filter life so you don’t go a day without clean, filtered water. The LARQ Bottle Filtered offers an on-the-go option for PFAS protection, removing dozens of forever chemicals like PFAS, HAA5, and heavy metals like lead, too. This way you’re never without clean, filtered water—not even while traveling.

Thinking about opting for bottled water instead? Think again. Studies have found PFAS in bottled water too. The Food and Drug Administration has yet to set mandatory limits on PFAS in bottled water, hence why it’s so frequently detected. Along with its negative environmental effects, it’s best to avoid bottled water altogether and opt for a more sustainable option such as installing a reverse osmosis system in the home, or an easier alternative of opting for a water filtration pitcher to remove contaminants like PFAS and PFOS.