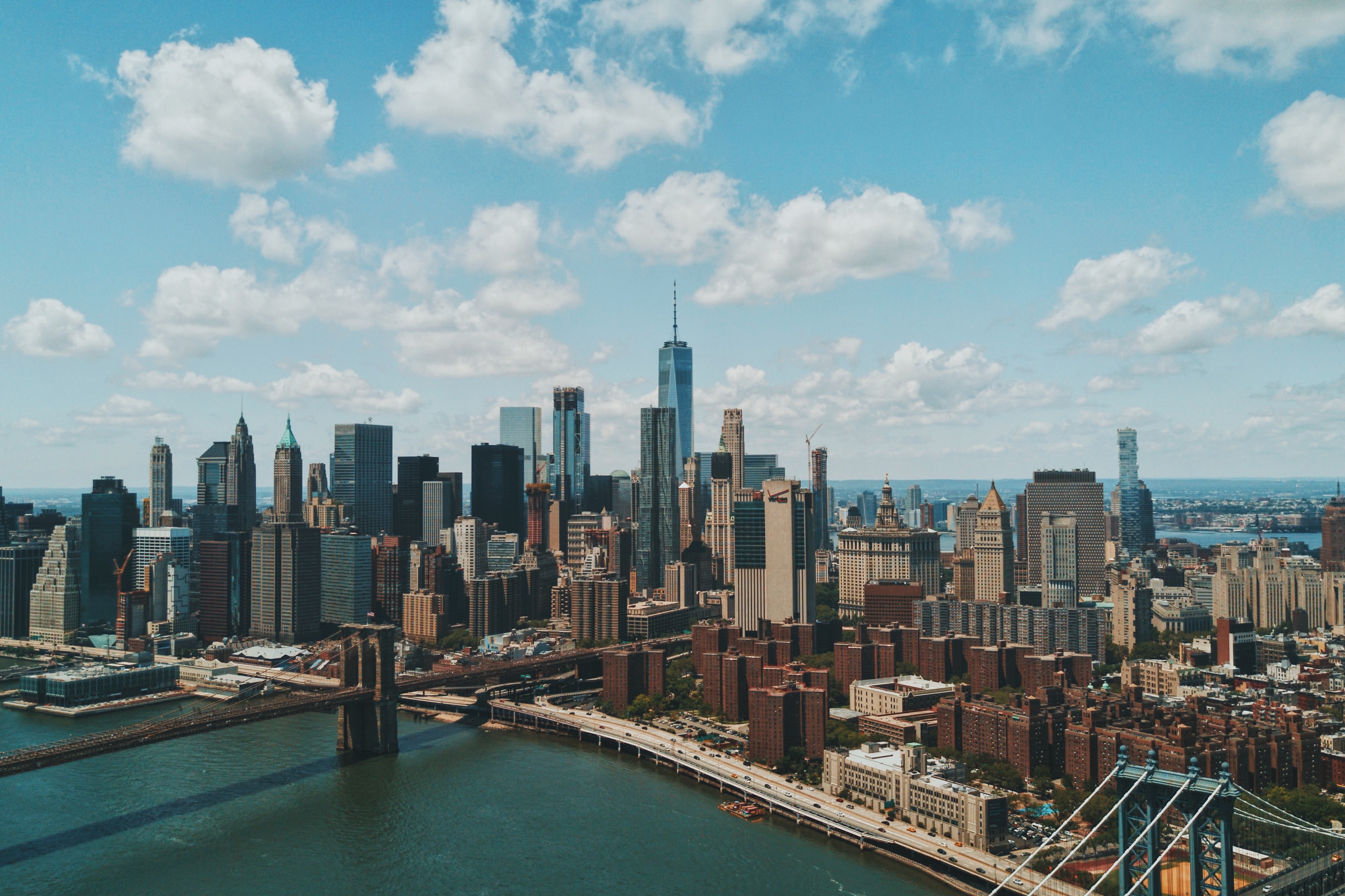 An in-depth look behind America’s “champagne of tap waters”

It’s been called the “champagne of tap waters,” hailed as the magic ingredient behind world-famous pizza crust and bagels, and is highlighted as one of the many shining features that make NYC locals so darn proud of their city. But how clean is the tap water in New York City, really?

When you compare drinking water quality by city, New York tap water definitely ranks highly — but there are still some causes for concern you should know about before sipping straight from the faucet.

New York’s tap water isn’t quite as healthy as popular perception makes it seem, primarily due to elevated levels of lead (pb) and disinfection byproducts like HAA5 and TTHMs. Its problems become particularly apparent when we compare NY tap water’s pollution levels to more stringent health standards from the FDA, American Pediatric Association, and the EWG.

New York City’s drinking water is unfiltered, making it the largest unfiltered water system in the country. NYC’s water supply primarily comes from the Croton, Catskills, and Delaware Watershed. Since NYC’s water is unfiltered, pollution leaching into the water from nearby industrial processes close to the watershed is a health concern. Additionally, NYC’s water is treated with chlorine, fluoride, orthophosphate, and sodium hydroxide in an effort to make it safe to drink. However, some of these chemicals can interact with the environment to form carcinogenic Disinfection Byproducts, which can present worrying health-related side effects.

A quick history of tap water in New York

While NYC is one of the greatest cities in America, it’s also one of the oldest. With that storied history comes concerns about its aging infrastructure and, as a result, its tap water.

When it was a Dutch settlement in the early 1600s, New York City residents got their water from ponds, streams, and wells. But as the city grew and its population skyrocketed, so did its need for clean water. It began looking to upstate Croton River for its water supply in 1842, building huge dams and aqueducts to get the water from the river to its residents. Finally, the city realized it needed an even bigger water supply to keep up with its growth in the early 1900s and turned to the northern Catskill Mountains.

Today, the vast majority (96%!) of the New York tap water has traveled about 125 miles from watersheds in the Catskill Mountains and the upper Hudson Valley to your faucet. The remaining four percent of the water comes from the Croton.

New York City’s main water source comes from the water treatment facility at the KENSICO RESERVOIR, which is one of the largest water utilities serving over 8 million New Yorkers.

Is tap water safe to drink in New York?

The tap water is a point of pride for New Yorkers. It consistently ranks highly on drinking water quality reports, and the city makes it a point to test its drinking water frequently to ensure it meets state and federal regulations.

Unfortunately, the drinking water still might not be as sparkling-clean as its hype proclaims.

Based on publicly available data from the EPA, EWG, and other resources, we identify the following contaminants as a potential concern for the region.

Lead contamination is one of the most significant threats to our national water security, with a staggering 186 million Americans estimated to have drunk water from lead-contaminated sources between 2018 and 2020.

Here’s why this matters: studies show that no amount of lead exposure is safe for children or adults.

Your body has no way to get rid of this toxic metal, and accumulation can lead to serious health issues like reproductive issues, heart problems, and kidney damage. Even low levels of lead in blood can lead to various problems in children’s health including reduced growth indicators, delayed puberty, lowered IQ, hyperactivity, and problems with hyperactivity, attention, behavior, and learning (link). This is why the American Academy of Pediatrics sets its recommended lead (pb) levels at only 1 ppb (part per billion) versus the much less stringent EPA standards of 15 ppb (link).

Unfortunately due to a century of unleaded gas usage and other industrial runoffs, lead is literally everywhere.

Just take a look across state lines to the infamous water crisis in Newark, NJ, a city that has been battling the fallout of lead-contaminated pipes since 2016. It’s now replacing all of its lead service lines after a quarter of its children under the age were found to have measurable levels of lead in their blood.

While New York City stopped using lead to build its pipes in 1961, hundreds of lead pipes still remain from before the ban. In 2018, the city’s Independent Budget Office reported that 12 NYC neighborhoods showed high levels of lead in their water, which was especially problematic in older homes built in the 1920s and 1930s. What’s worse: there are still 360,000 lead service lines in the state delivering water to people’s houses, according to a survey by the Natural Resources Defense Council. This means that water could be passing through lead pipes before they get to your residential plumbing system, even in newer buildings.

Over the last 5 years, the main water utility for NYC consistently registered 10-12 ppb for lead (see table below). While this number is just below the EPA health limit of 15 ppb, it far exceeds other health standards such as the FDA standard for bottled water (5 ppb), or the American Pediatric Association recommended standard (1 ppb).  Since no amount of lead is considered safe, we highlight this as a potential risk.

The NYC Watershed has bragging rights as the largest unfiltered water source in the United States. Instead of passing through a filtration plant, New York’s water goes through a natural filtration process via the forests, swamps, and soils on its way down to the city.

But while the natural filtration of the NYC water means that it tests cleanly enough for state and federal standards, not everyone agrees. According to the nonprofit Environmental Working Group’s (EWG) Tap Water Database, testing on New York City tap water found 18 total potentially hazardous contaminants, with 10 of those contaminants exceeding their health guideline limits.

And while there may not be a legal necessity for New York City tap water to be additionally filtered, it is still treated with chemicals like chlorine, fluoride, orthophosphate, and sodium hydroxide to make tap water safe to drink. But these can also present issues of their own.

Take HAA5 (haloacetic acid), for example. This volatile organic chemical (VOC) is formed when disinfection chemicals like chlorine or chloramine interact with other organic and inorganic compounds in the environment. HAA5 is one of four potential disinfection byproducts identified by the EPA and is considered to be carcinogenic to humans.

In the last 3 years, the water utility serving NYC has had at least one civil enforcement action brought against it for failing to meet regulatory standards for HAA5s. In fact, as recently as the 4th Quarter of 2021, the NYC water utility failed to comply with the Maximum Contaminant Level (MCL) for HAA5s associated with the Stage 2 DBPR.

In addition, trihalomethanes(TTHMs) are cancer-causing contaminants that form during water treatment with chlorine and other disinfectants. The total trihalomethane group includes four chemicals: chloroform, bromodichloromethane, dibromochloromethane, and bromoform.

Climate change creates a problem for most water supplies, but since New York City’s water is unfiltered, the rising levels of turbidity could cause more immediate negative health impacts.

New York City’s iconic skyline boasts magnificent skyscrapers, high rises, and other buildings that stretch towards the sky. But the water mains only have enough pressure to deliver water up to the sixth floor, so taller buildings rely on rooftop water storage tanks to deliver water to the higher stories. Unfortunately, these water tanks may not be as heavily regulated as you might like your drinking water source to be.

A 2014 New York Times investigation sought to figure out how clean those water tanks really were by taking water samples from 14 different water tanks — and what they found was pretty alarming. 8 tanks tested positive for total coliform bacteria, and 5 tested positive for E. coli, presumably due to fecal contamination from invading pigeons, squirrels, and other animals.

NYC’s water also contains tiny shrimp called copepods. These microscopic crustaceans are not actually harmful and are instead used to clear the water of mosquito larvae. But while they may lead to cleaner water, the presence of copepods means that NYC’s drinking water is technically not Kosher.

So, can I drink the tap water in New York?

The water you get from your New York City faucet is really good compared to many other cities. But even the “champagne of tap waters” isn’t free of potential health hazards like biological contaminants, hazardous chemicals, and toxic lead. The bottom line is that when it comes to water contaminants — and especially when we’re talking about contaminants like lead that stay in your system forever — “mostly” clean is not clean enough.

Water bottles aren’t a good alternative, either: New Yorkers throw out an estimated 1,579,600 pounds of plastic bottles every single week.

So, what can you do?

The short answer as to whether you can drink tap water in New York: it is certainly held to a higher standard than many other tap waters around the world, but it’s definitely not perfect. You should still do your due diligence and filter any water you will be consuming to guarantee safe, clean, and nontoxic hydration in the Big Apple and beyond.