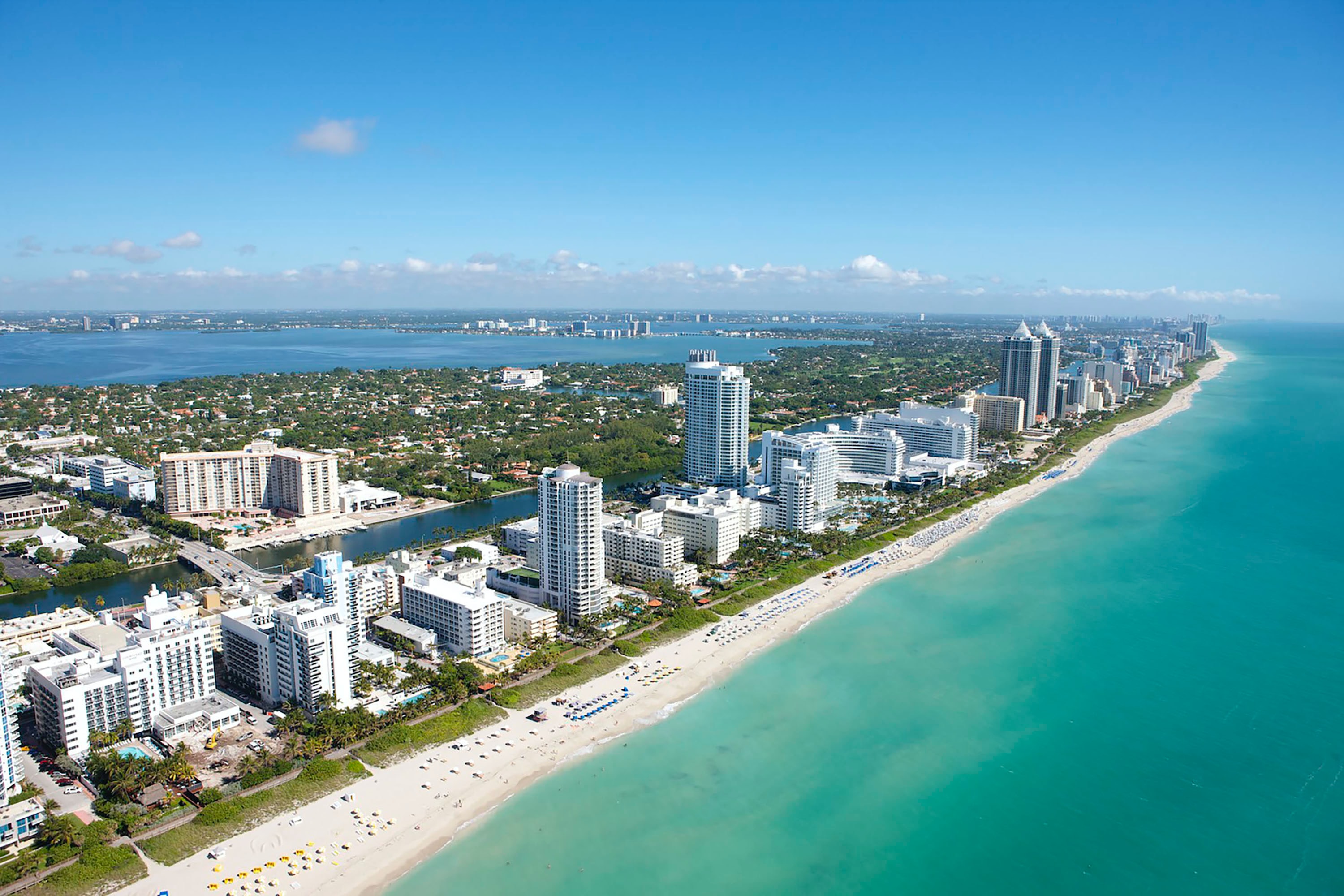 If you’re looking for a good time and plenty of fun in the sun, you can’t do much better in the continental United States than Miami, Florida. From a nightlife that doesn’t stop even when the sun comes up to warm, picture-perfect beaches, Miami is consistently ranked as one of the best places to travel and one of the most desirable places to live year-round.

Unfortunately, Miami also has its fair share of unique challenges when it comes to its water quality since it’s surrounded by bodies of water, attracts a ton of visitors, and is prone to dramatic weather events. Here’s what you need to know about Miami tap water safety before taking a sip.

Miami tap water: where it comes from and how it’s treated

The city of Miami gets its tap water from the Biscayne Aquifer, an aquifer that is located just below ground level. The groundwater is naturally filtered by the porous rocks of the aquifer, but it is also more susceptible to contamination since it’s only a few feet below ground in most places.

The water is then pumped through wells and treated by the Miami-Dade Water and Sewer Department, who then go on to distribute the water to be used by locals, tourists, and businesses alike. The water is also tested thoroughly to ensure that the water quality meets US Environmental Protection Agency (EPA) regulations.

The tap water in Miami can technically be considered safe since it adheres to local and federal regulations. Unfortunately, as is true with many other cities throughout the world, legal limits on their own may not be enough to guarantee safe water.

PFAS, which stands for per- and polyfluorinated substances, are so-called “forever chemicals” that are used for various manufacturing processes. They get their “forever chemicals” nickname because they don’t break down in nature, which means that once they are made and tossed away, they can stay in the environment virtually forever, contaminating water sources and accumulating in fish, wildlife, and yes, humans.

One of the natural consequences of being such a busy city is that Miami tap water is especially prone to high levels of PFAS and PFOA. In fact, according to a survey by the nonprofit organization Environmental Working Group, Miami has some of the most PFAS chemicals in the entire United States, ranking third-highest in the country.

Interestingly, Miami’s water tested for 56.7 ppt (parts per trillion), which is somewhat less than the EPA’s limit of 70 ppt. However, this is significantly more than what the EWG believes is a safe amount (1 ppt).

Why this matters: there isn’t enough information yet to know just how PFAS and PFOA exposure can affect humans on a long-term basis. However, what we do know so far is pretty scary. For example, according to the CDC, studies on animals have shown a link between high PFAS exposure and issues with growth, development, reproduction, thyroid function, immune system, and liver health. The EPA has also cited concerns that PFOA and PFAS exposure can compromise the immune system and cardiovascular system, and may even be linked to lower birth weights in babies even at very low levels.

Another significant water quality concern that comes as a consequence of industrial advancements is the presence of microplastics, or tiny pieces of plastic that make their way into the environment and our water systems. Similarly to PFAS, plastic does not easily degrade, which means that once thrown away, it can stay in our environment for a very, very long time. They can then make their way into the water supply system and eventually be consumed by wildlife and humans alike.

It’s especially interesting to consider the problem of microplastics when you look at Florida, which is prone to frequent buffeting by hurricanes that disturb and distribute the sediment that collects in the ocean. Of course, Miami is also a highly appealing city for visitors, which attracts plenty of tourists and, subsequently, plenty of trash. The resulting microplastics in the surrounding oceans are especially burdensome for marine life, and they can also make their way up into the food chain to humans.

Miami’s tap water isn’t safe from lead contamination, either. Lead metal is highly toxic and is linked to a variety of serious health consequences like reproductive system harm and neurotoxicity in children, which means that the government made huge strides to discontinue the use of lead in water pipes and paints in the last century. It is also highly monitored to ensure that it does not reach high levels (currently, the actionable level of lead in water is 15 parts per billion).

Unfortunately, this isn’t enough to guarantee safe, lead-free water. In Miami, lead in tap water likely comes from “leaching,” when old lead pipes in old homes corrode. In fact, according to Miami-Dade County’s water quality reports, 2% of homes actually exceeded the actionable limit in 2021.  Again, the actionable level of lead is 15 ppb — but unfortunately, many health organizations agree that this is already too high. There is no known safe level of lead and, as there is no way for your body to get rid of lead metal, it can also accumulate over time.

Finally, it’s also worth taking a look at the waterborne diseases in the Miami area. A study looked at the number of confirmed cases of waterborne illnesses in Florida between 1999 and 2019 and found:

Bottom line: you should definitely filter your Miami tap water before drinking.

Miami’s tap water is legally safe to drink according to local and federal standards. But this really isn’t enough to say that Miami’s tap water is completely clear of potentially harmful substances, chemicals, and bacteria, especially when it comes to a city as busy and prone to turbulent weather events as Miami.

So before you drink, filter your Miami tap water through a filter that eliminates:

LARQ’s Bottle Filtered and Pitcher PureVis use Nano Zero filter technology to eliminate all of these scary contaminants and more, which means a fresher and cleaner sip of water no matter where your Miami adventures take you!